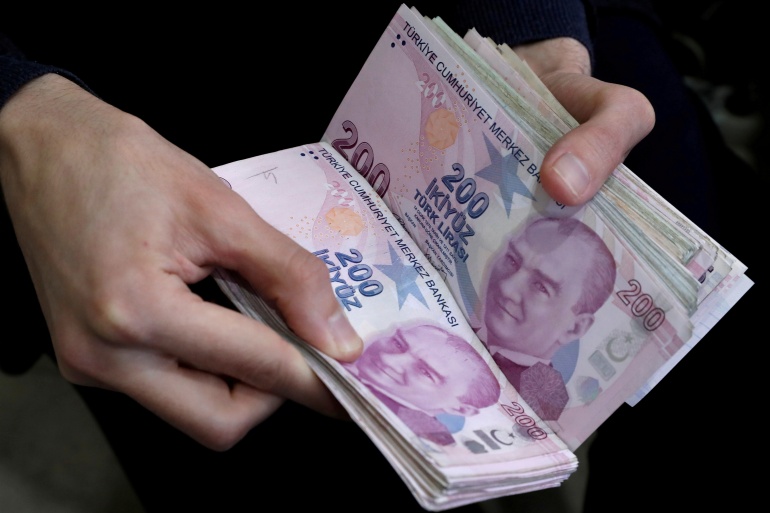 The Turkish lira has fallen to another record low against the US dollar. In the meantime, 9.098 lira were available for one dollar on Wednesday. The currency has been under increasing pressure since the end of September after a key interest rate cut despite the high inflation rate. President Recep Tayyip Erdogan repeatedly puts pressure on the central bank and demands lower interest rates. He believes that high interest rates cause inflation, which contradicts current economics.

The decline in the lira accelerated on Monday after Erdogan indicated that a new military operation against the Kurdish militia YPG could be imminent in neighboring Syria. That would also lead to further tensions with the US, which supports the Kurdish militia in Syria.

Turkey has long struggled with high inflation. According to official figures, the annual rate in September was around 19.58 percent. Food in particular is becoming more and more expensive, the inflation rate for food and non-alcoholic beverages was recently around 29 percent, according to the statistics agency.

The Turkish President Recep Tayyip Erdoğan interferes again in the personnel policy of the Turkish central bank. The rate of the local currency is falling. Gas and oil prices are rising again on the raw materials market.

The euro rate moved little on Thursday. The common currency was quoted at just under $ 1.16 in the evening. The focus on the foreign exchange market was the Turkish lira. Turkish President Recep Tayyip Erdoğan has once again interfered in the central bank’s personnel policy, paving the way for new interest rate cuts. He dismissed the two deputy central bank governors Semih Tumen and Uğur Namık Küçük and Abdullah Yavaş, the most experienced member of the monetary policy committee. Küçük and Yavaş recently annoyed the self-proclaimed « interest rate enemy » Erdoğan because they had resisted the interest rate cut that had been decided last month. The financial markets were not impressed, especially since Erdoğan had already given up three central bank governors within two and a half years. The rate of the local currency, the lira, temporarily fell to a record low of 9.1900 against the dollar. This year alone it has lost around 19 percent of its value. According to observers, this is also due to Erdoğan’s constant interference in central bank matters, which undermine confidence in the independence of the monetary authorities and in the lira.

The rising demand at the beginning of the heating season drove up European natural gas prices again. The futures contract traded on the ICE gained 8.1 percent to 101.20 euros per megawatt hour. According to analysts, price drivers are rising demand in view of the cooler weather and the continuing uncertainty about Russian supply in the coming months. The oil price also rose. The price of the European oil type Brent rose by 1.2 percent to $ 84.20 per barrel, making up for the decline on Wednesday. « An unexpectedly sharp decline in US gasoline and distillate inventories led to new purchases, » said Kazuhiko Saito, chief analyst at Fujitomi Securities.